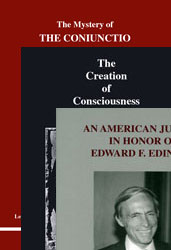 An American Jungian: In honor of Edward F Edinger : Edward F. Edinger was such a significant presence in the worldwide Jungian community that this volume can only begin to assess his greatness as an interpreter of Jung’s work and his dedication to the significance of Analytical psychology—but it well illustrates his worth. This extraordinary compilation brings together essays and reviews by Dr. Edinger together with appreciations by others of his work and interviews with him. None of it has previously been published in book form. Contents include:
The Creation of Consciousness : Jung’s Myth for Modern Man : This seminal work, proposes a new world view based on the creative collaboration between the scientific pursuit of knowledge and the religious search for meaning. Contents include:
·         The New Myth
·         The Meaning of Consciousness
·         Depth Psychology as the New Dispensation : Reflections upon Jung’s Answer to Job
·         The Transformation of God
The Mystery of the Coniunctio : Alchemical Image of Individuation : Edinger puts a human face on the union of opposites in two concise essays: “Introduction to Jung’s Mysterium Coniunctionis” and “A Psychological Interpretation of the Rosarium Pictures”–the alchemical drawings on which Jung based one of his major works, The Psychology of the Transference. This book takes a look at how the arcane practices and images of alchemy arise in modern dreams and are parallels for the psychological process of individuation.
$85 if purchased separately. Spoil yourself this year and get all three for only $60 –  The Edinger Bundle!