INNER CITY BOOKS is proud to add TWO NEW TITLES to its substantial, acclaimed canon of Studies in Jungian Psychology by Jungian Analysts:

This extraordinary compilation brings together essays and reviews by Dr. Edinger together with appreciations by others of his work and interviews with him. None of it has previously been published in book form.

Edward F. Edinger was such a significant presence in the worldwide Jungian community that this volume can only begin to assess his greatness as an interpreter of Jung’s work and his dedication to the significance of Analytical psychology—but it well illustrates his worth. 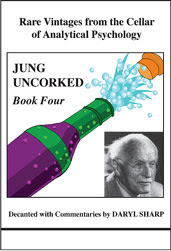 This volume concludes the author’s adventurous Uncorked series (see titles 120, 121, 123) explicating various essays in C. G. Jung’s Collected Works. Each chapter presents spirited passages from an essay in one volume of Jung’s CW, with experiential commentaries on their psychological and contemporary relevance.